For many small businesses around the world, social media advertising can be a bit frustrating. Each social network has its own culture, personality, and everything revolves around the kinds of people they appeal to. You have your all-around networks, like Facebook and Twitter; and then you have your professional buttoned-up networks, like LinkedIn. Each one also functions differently, meaning that you have to work on making your advertising blend in to the particular way they display it.

This is a lot to take in, especially for someone just getting started in advertising. That’s why I’m presenting a quick guide that compares the pro’s and con’s of advertising on Facebook, Twitter and LinkedIn.

Facebook has a special place on the internet. It has a well-established place in the market, with over two billion connections between people and their local businesses. According to Gwendolyn Belomy from The Outcast Agency, Facebook pages cumulatively get an average of 645 million views and 13 million comments each week. In the United States and Canada, around 70 percent of active Facebook users clicked the “Like” button on at least one local business. This is an enormous market and a great potential for you to attract consumers.

The big price is hard to gauge on Facebook, since it all depends on a complex algorithm. Basically, the more you target your ads, the cheaper your cost-per-click bids will be. When it comes to putting Facebook head-to-head against Twitter, 80 percent of Facebook users use the social network to connect to brands, compared to 6 percent of Twitter users, according to an article by HubSpot. So, the main points of using Facebook for advertising are:

Facebook is a great place for you if you want to get started with advertising and there are a plenty of books out there that can help, including Ramon Ray’s ‘The Facebook Guide To Small Business Marketing, which has a chapter solely dedicated to explaining the in’s and out’s of advertising on Facebook. 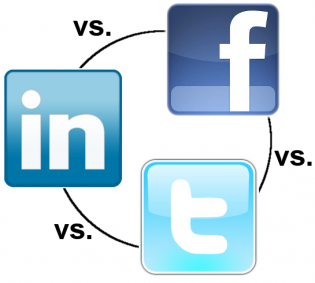 Twitter’s been a very speedy and rapidly changing social tool for several years now. In short, it’s amazing. Twitter has been ahead of viral trends for a very long time and has been a great predictor for what is going to be news. It really gets into the mind of the crowd!

Twitter’s outreach may not be as big as Facebook, but still takes on a considerable chunk of the internet – about 550 million users, according to these statistics from Statistic Brain. The same site tells us that 135,000 users sign up every day, making 2.1 billion search queries within the same amount of time. Nearly half of its users are mobile (something to keep in mind if you plan to make a campaign linking to your site).

This astoundingly active community boasts an innovative advertising system. Basically, you pay for your tweets to be promoted (moved up the list) in relevant search results. If you use American Express, they’ll give you $100 of free advertising to boot. Because of its relevance to search results, it has higher value than Facebook. But don’t expect many users to follow you. They’re not necessarily looking for local brands. Earlier, I mentioned how only 6 percent of Twitter users actually use this network as their preferred method of connecting with local businesses. That’s quite the downer! Let’s recap, shall we?

All things considered, this is a great social network for businesses looking to go viral. Don’t advertise a product. Post something that will make the crowd go wild. It’s the nightclub of the Internet.

If you’re looking for something a little more classy with professional attire, LinkedIn is the black-and-white gala of the web. It contains the largest collection of professionals gathered up in one single place in history. If you’re a business-to-business (B2B) provider, you will definitely benefit from it. As of March 2011, LinkedIn had 100 million registered users. Although we don’t know how many of them are active (the earlier link mentions that few of them still use the service on an occasional basis), it is still a thriving community with several entrepreneurs, job-seekers, and CEOs alike.

Its advertising system is simple: You pay, they advertise. It’s similar to Facebook. You can target based on seniority, company, job title, school, skills, networks, and many other variables. The average click-through rate on LinkedIn tends to be higher, according to some advertisers’ reports. However, your bids will end up being more expensive, at a minimum of $2 per click. Let’s recap:

Keep in mind that you will probably not attract anyone with consumer products. This is only a proper place to advertise if you’re looking to hire or you’re selling a B2B product.

The Sky’s The Limit!

When it comes to advertising, there’s perhaps only one social network that you’ll really fall in love with. As I mentioned before, each one has a unique way of approaching things. Only one of them (maybe two) will really match up to what you want and deliver the reach and response you are hoping to acquire.